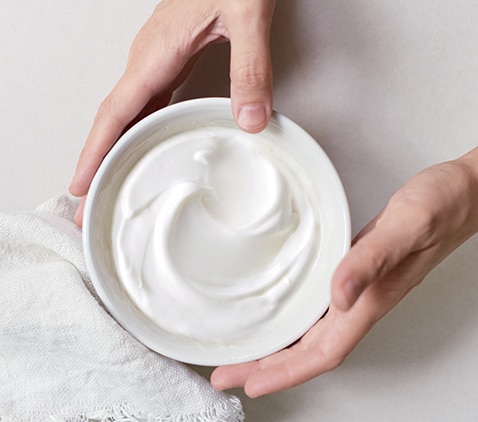 Yogurt is a food with a delicious creamy consistency and sour taste derived from milk, through a fermentation process activated by selected lactic bacteria ferments.

The origins of this food, now so widespread in our kitchens, are ancient and uncertain. We assume that its discovery occurred by chance: since prehistoric times, man had observed that milk stored in skins was naturally transformed into yogurt, thanks to the action of lactic ferments contained in milk in combination with high temperature.

Yogurt is generally obtained from cow's milk (whole, partially, or totally skimmed), but also goat, sheep or buffalo milks can be used to produce it.

The fermentation process is operated by selected lactic bacteria (Streptococcus thermophilus and Lactobacillus delbrueckii subsp. bulgaricus) and consists in converting a part of sugar contained in milk (lactose) into lactic acid. This reaction promotes the creation of an acid environment, in which coagulate proteins, make creamy yoghurt.

For the preparation of soft sponge of Kinder Plumcake, we use Greek style yogurt from whole cow's milk, purchased from only European suppliers.